RUBEN ÖSTLUND ABOUT HIS FILMS

“I heard that Nils Petter Sundgren [a respected Swedish film critic] said he could sense the scent of blood when he saw Gitarrmongot, and Ronny Svensson [a Swedish journalist] claimed that it was one of the worst Swedish films that year. So I called him and asked if he could tell me what the worst thing about it was. I wanted to put that as a quote on the DVD cover.”

“This short film was used when trying to convince our film commissioners to produce Involuntary, and it was also supposed to be a part of the film. It’s about a few friends who see a bridge and one of them decides he’s going to jump from it. When they get there, they realize it’s actually higher than they thought, and a man who passes by tells them that people have died jumping from it. The whole situation then turns into a conflict between our survival instinct and the humiliation of social defeat.”

“After making Gitarrmongot, which was about people who didn’t care about fitting in, I wanted to make a film about the complete opposite: the human being as a herd animal and our fear of losing face. It’s interesting because in Sweden people liked Involuntary, but in other countries it was regarded as very provocative. For example, in France people said it was ‘a bad advertisement for Sweden.’”

“A short film reconstructing an attempt to rob a bank, which Erik Hemmendorff and I witnessed outside Nordiska Kompaniet in Stockholm. Erik asked if we should call the police, but I said no, because I ‘knew’ they had alarm buttons next to the cashiers. I had never experienced a robbery before; I had only seen it in movies, and mostly American ones. I realized that the reality was very different from the movies.”

“Usually the actions of people in films are explained from a social point of view; therefore, the audience expects a psychological explanation. But if that aspect had been part of this film, it wouldn’t have been as provocative. I think the most provocative thing about Play was that the balance of power was reversed. The people we are used to seeing as victims were in a position of power, and those who are usually powerful were instead victims.”

“The idea was that if you’re holding hands at the beginning of watching this film, you’ll end up letting go and slowly moving away from one another during the rest of the movie. At the same time, many have thought it is humorous. After it was screened in Cannes, an American journalist wrote: ‘I never would have thought I might encounter a ski movie comedy at Cannes.’”

…AND ABOUT FILMS AND VIDEOS HE LIKES

“A tourist video of buffaloes and lions in the Kruger National Park in South Africa, which has more dramatic twists than a Shakespeare play. This is for sure my most viewed clip on YouTube.”

“There have been many disputes about Jane Elliott’s methods because of the tough sociological experiments she uses in order to open up people’s eyes to racism. In this [experiment shown on Channel 4] TV show, she uses her methods on British test subjects, which results in pretty different reactions.”

“If you feel that you long for the experience of watching really good acting, then I strongly recommend this TV documentary. It was filmed just before Ernst-Hugo Järegård passed away in 1998.”

[Ernst-Hugo Järegård was a Swedish actor. Before he passed away, his son, Johannes Järegård, made the documentary Aktörens läte about his father, which can be seen as the testament about acting he left behind.]

“Gummo was released when I was still in film school, and it has influenced many filmmakers of my generation. Harmony Korine, who was only 23 years old at the time, showed a new, and not very flattering, side of the U.S.”

“If you grew up in Sweden during the 1970s, you hold Roy Andersson’s commercials close to your heart. In Härlig är jorden, he brought the aesthetics of the commercials into a short film. Many believe this to be his best film ever.”

From FILTER MAGAZINE article:
“Path of Most Resistance”, by Oscar Sonn Lindell
translated from the Swedish by Klara Kovac 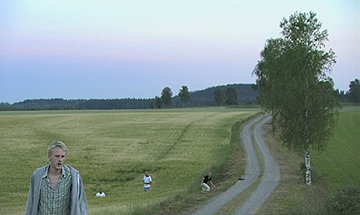 During the premiere week of the retrospective tour, Ruben Östlund visited the production offices of the Criterion Collection and had a look in their vault. See which DVDs he picked and what he had to say about the influence of major Swedish filmmakers on his work.