A DEBUT WE HAVE BEEN WAITING FOR

The introduction of Ruben Östlund’s debut film Gitarrmongot is just as daring as it is effective. Grainy images from Allsång på Skansen [Swedish sing-along TV show that takes place every summer at Skansen, Museum and Zoo] with Lasse Berghagen [Swedish musician and TV personality] becomes more and more grainy until only the gray TV noise, which is their true identity, remains. It’s sabotage against supposedly the most Swedish of all things. The reason why: on a rooftop a boy is setting all the TV antennas wrong in front of a breathtakingly beautiful sunset over the Göta River. Mendacious idyll is set against the comic – and beautiful – reality. If there is any purpose behind Östlund’s playful seriousness it has already been made clear: to show contemporary Sweden with all its multifarious individuality as an alternative to the cheerful collective on the TV.

The next images of the film alienate the viewer even more from the sing-along idyll. In a blue-yellow stairwell a woman is trying to overcome the anxiety that she left the front door unlocked. “The last time NOW!” she says over and over again like a curse as she turns the key in the lock. That same woman will eventually get her bike stolen and we will feel sorry for her – even though she, at the same time, is one of the relatively cocky survivors of the film. The long scene with the door also becomes sabotage: against the comic aspect of the introduction of the film. We are facing one of the film’s many depictions of repetition compulsion, mechanical actions that are performed out of boredom, of anxiety, of lack of imagination – or out of pure lust for life!

Gitarrmongot could actually be seen as a series of sabotages: against our expectations, against good taste, as well as the boredom of the standard Swedish film with its quickly forgotten stories that are just enough thoughtful, just funny enough and just recognizable enough. Östlund’s strength is that he doesn’t begin a story with words, but with images. This gives his films a memorable quality; almost as with very good still photography you will remember precisely each one of Östlund’s images. And Östlund really seems to love the common and extremely beautiful Gothenburg environments in the film. Although the scenes and their more or less peculiar events are conceived and invented, everything takes place in a townscape and interiors of intrinsic value, in contrast of most Swedish films where its only value is as a background.

Gitarrmongot is a series of tableau where we get to follow a few odd persons, above all the title character himself, a twelve-year-old street musician portrayed by Erik Rutström. The people of the film are not primarily actors but themselves, more or less.

Östlund’s strength is that he puts a piece of reality in his film in the shape of existing individuals – they bring a certain ambiance to the film, an odd hybrid of the absurdism of Beckett, the chiseled tragicomic of Roy Andersson and boyish pranks. But mainly, it’s a very accurate portrait of Sweden, with its good-natured and ordinary façade hiding an underlying menacing side. A group of boys massacre bikes, stupid, unnecessary and funny. A junior indoor hockey team practice sieg-heil greetings, but with the words in reversed order – are they aware of it? A car is driving by itself in a parking lot, and no one understands why. A strangely obscure man, who appears to have stepped right out of Woody Allen’s Deconstructing Harry, is playing Russian roulette – will he or any of his biker friends die? One thing is for certain: the viewer of Gitarrmongot is never safe; he will be surprised when he least expects it. Especially every time he believes he has figured out the idea behind Ruben Östlund’s thoroughly organized compositions within the frame of a strict square; suddenly, scenes end when unexpectedly, the camera that has always been still starts moving, and only one close-up is shown. The slow and monotone air of the film gets a more profound meaning by allowing it to be just that. Finally! You will want to scream, finally a really good Swedish debut film!

"A DEBUT WE HAVE BEEN WAITING FOR"
by Carl-Johan Malmberg
Svenska Dagbladet (SvD KULTUR), October 1, 2004
translated from the Swedish by Klara Kovac 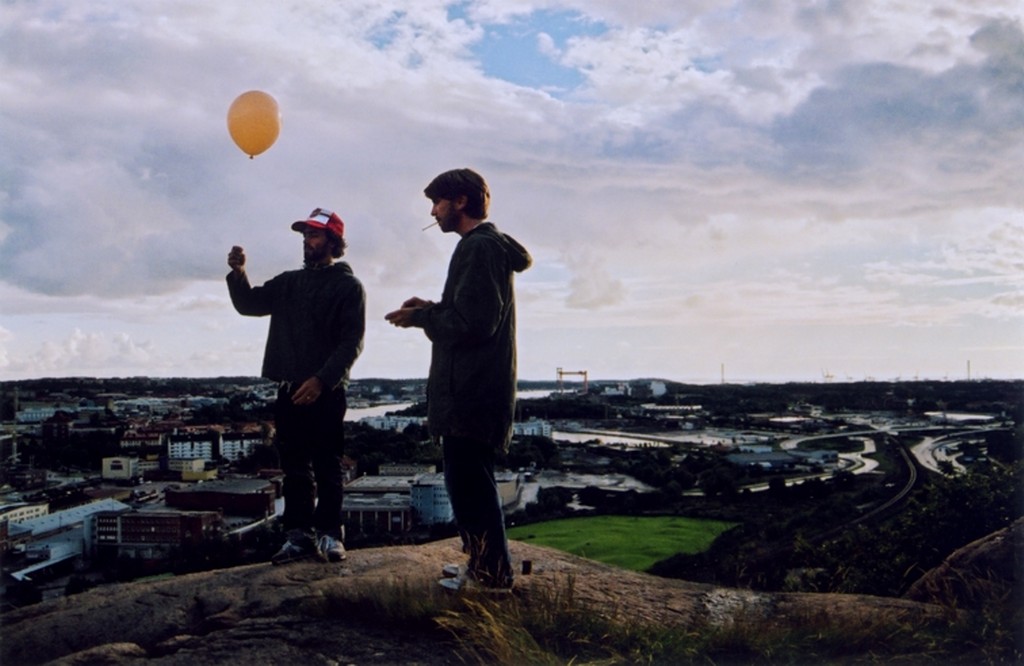